In a small Japanese village away from the world a summer will leave its mark on the villagers forever, as a plague seems to haunt them.  A dear one dies, and in the next days their families dies one after the other.

But a teenager newly moved into the village from the big city starts to suspect something else than a sickness, as a girl that has stalked him since he moved there stills follows him, even after her death.

Above the village there is a castle inhabited by a family that never comes out into the light, and as the corpse covered summer comes to a end, the battle for survival begins. Who will be alive and who will be dead in the end?

I started reading this manga a long time ago, but since the chapters came so late in the start I sort of lost track of it. But it was not because I didn’t like the story! I loves stories like this! A horror story that slowly builds up, and characters that we learn about on the way towards the climax.

The manga is based on the books by Fuyumi Ono, who wrote the hit series The Twelve Kingdoms and also the ghost series Ghost Hunt. I think it is really bad that the Shiki books are not translated, I hope that the anime will get recognition and the books will be translated too!

Well, let us start this off.

But after this we are introduced to our heroine

Megumi is your average spoiled brat girl, who does not think of anyone else than herself and do not care about what her loved ones would say if she were to leave them.

She dreams of leaving the village, to become a idol and hang around in clubs all night. Her two favorite things in the world is:

The newly built castle on the top of the hills. (I’m not kidding…). And her stalking interest:

Natsuno has just moved into town with his parents, and he is not pleased! He keeps studying for schools outside of the town so he can get away from Sotoba. And he should also work some on his people skills, but we will get back to that later.

Then the dreaming stalker gets what she deserves:

We then cut over the important things happening in this village, as the police (that will not have any importance in the story at all) Is checking the scene of some normal deaths, and a mutilation killing that has been discovered by the town’s young munk. 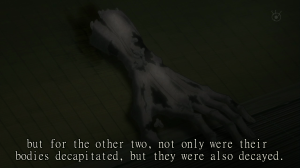 Then enter out other lead characters!

Seishin is the son of the old head priest, and also the heir to one of the old families in the village as I have understood. He seems to be a kind person, but also a little depressed. And I have a big problem with his eyes! He is a human isn’t he?! Then why does he seem to have the Shiki eyes XD?

Beside Natsuno I think you can say this is the lead character. He is the village’s doctor, and when his patients keeps dying, he takes it personal! He is married, but his wife lives out of the village. And yes, he smokes all the time, if the shiki don’t get him, the smoke will!

The two of them are childhood friends, and they discuss what could be the reson for the deaths together.It seems that the woman died later than the men, so they wonder why she had been living together with the bodies for two days.

They dismiss it to be a animal attack.

Then back to the stalking!! 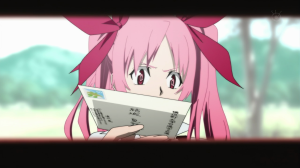 She tries to slip a sumer greeting card for Natsuno into the post, but she does not dare it! (Ok, she can hang out his window for hours but not send him one card?)

But she is suprised by other lead characters!

But Megumi does not stick around, as she is mad over the fact that their village has appeared in the newspaper because of the receant deaths. And she runs off being mad at everyone for being so weird.

But then her Natsuno senses tingles!! 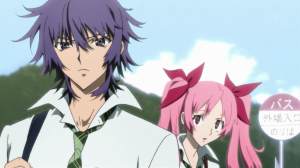 Natsuno does like everyone should do when the stalker that stands outside your window at night comes to talk to you: he overlooks her and hope it will soon go away.

Cut to the night! As the family that has build the castle on the mountain finally arrives, and a caravan of trucks wakes up the family in the house, for the first time showing one of out main bad guys!:

But for the main part of the story he is more like this:

Isn’t he just adorable XD? I swear that he grew bigger muscles later in the manga but that might just be me XD Tatsumi is the main guardian of the castle, since he can be out in the sun. You will find out why later in the series 😛

Over to weird girl again!  As she now has a dream of just what she wants to happen if she ever enters the castle…

She keeps dreaming about meeting the family son, when Kaori comes and tells her that the family has a daughter almost their age and not a son, As she runs away from her only friend in the world after she says she has no interest in the castle and the people living there.

Then her reversed stalker senses tingles!!: 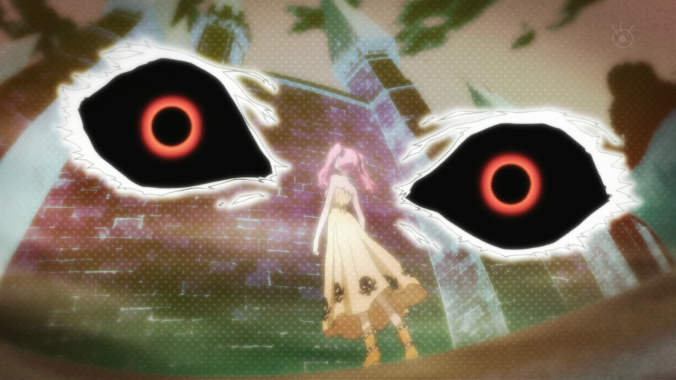 Then the gate opens, and she watches in awe as the couple of the castles comes out to greet her. 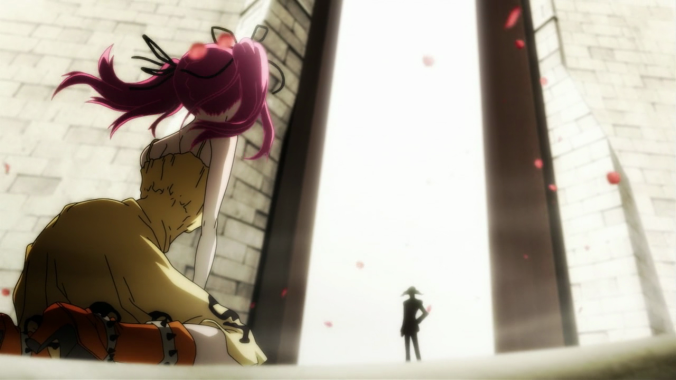 (God Gackt! Turn the sparkle machine in the background down a few degrees!!! O.o. Gah!! I am blind now!!!)

As she is not back before nightfall, a searchparty is sent to look for her, and she is soon found in the mountain, weak and with a loss of blood. 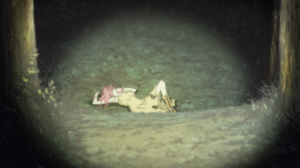 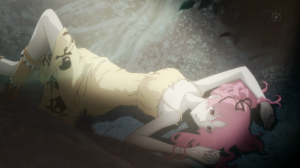 Both the doctor and her friend Kaori tries to get out of her what is wrong, but in the end she dies off a blood loss, after what seems like a really scary LCD trip. 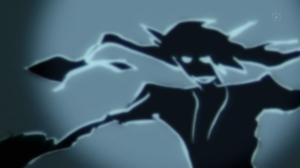 And how does her beloved Natsuno grieve over her sudden death!?

Rejoice over the fact that he is no longer stalked and can have his window open in the death warm Japanese summer weather! Our hero people! He also says no later to a last gift from her by the way. I love this guy!

I don’t know if I will take the episodes in between, but I might write a little about the episodes as they come out now, 15 are out of 22 episodes. The series does progress slowly, but it does take off! Some of that happens, and then some of this, and things gets awsome!! I don’t really know which side to root for, but this far Natsuno is my favorite XD And I will refrain from spoiling what does happen to him in the newer episodes!

My view of this anime so far is to think it is what would happen if Sadako and Kayako got a child together, raised it together in the village from Higurashi, then decided it was too scary and moved to America just to end up in Stephen King’s Salem’s lot. (Seriously! It does really feel a little like that story!)

Well, enough ranting for now XD This has taken some hours XD